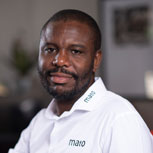 Sibanda  has been in his current position heading 16 staff and a two-shift system production plant since March 2015. He worked his way up to the position after proving himself more than apt as Inventory Clerk, a role which was specifically developed to cater to the recommendations of the TUV ISO 2001 audit in 2006. From there on his promotions were swift, appointed to Inventory Controller in 2008 and to Materials Manager responsible for total management of materials and internal sales departments in 2010. In 2013 Sibanda formed the operations division as Operations Manager, until his promotion in 2015.

Business Philosophy: If something is worth doing, do it to the best of your ability and strive to do it right the first time, always. Otherwise, don’t even start.