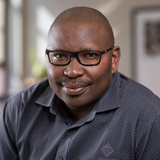 Majola, who has his National Higher Diploma in Extraction Metallurgy and an MBA, has more than 20 years of experience in mining and metallurgy. He joined the minerals industry after being awarded a bursary to study metallurgy from Anglo American Diamond Services in 1991. Following completion of his studies, he worked as a Production Metallurgist at De Beers before transferring to AngloGold as a Senior Plant Metallurgist.

Majola then a joined Canadian company SouthernEra Resources, where his career transitioned from production to projects. He oversaw a number of greenfield and brownfield projects from feasibility study phase through to construction and commissioning.

Majola spent some time at Hatch as Process Engineer responsible for the design of the platinum tailings re-treatment concentrator. His sales career began at Bateman in 2006 where he managed a team of sales engineers in process equipment sales. He joined Multotec in 2013.

Majola’s well-established record managing others and working across a number of commodities and projects, and his participation in the full mining value chain enables him to bring a variety of perspectives to customer problems. He is fluent in English and isiZulu and speaks Afrikaans and Sesotho.