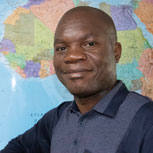 Peter holds a BSc Honours in Mechanical Engineering and Master’s Degree in Business Leadership (MBL) from The School of Business Leadership, UNISA.  He brings vast hands-on technical, leadership and entrepreneurial experience from various organisations locally, regionally and internationally to his position as General Manager.

Peter led the start-up of Firestone Diamond’s BK11 Mine from an exploration site into a production mine, among other projects with corporations like Anglo American, Cummins and Marce Fire Fighting.

He has received several academic and merit awards including the Benjamin Kass Prize; and Top 5 Young Engineers in Anglo American Corporation.