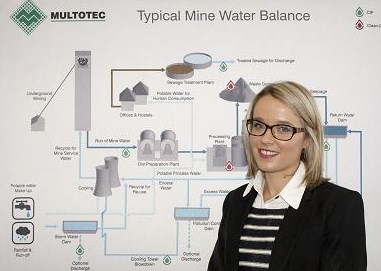 Following the introduction of continuous ionic filtration (CIF)® and its dual-stage big brother for desalination, DeSALx®, Multotec, Clean TeQ’s regional partner for Africa is currently installing its first commercial water treatment plant to use this technology.

“This is good news. We are now busy implementing our first-ever wastewater treatment plant to use the DeSALx® ion exchange water purification process,” says Spagnuolo. “In conjunction with other water treatment technologies, this project will apply continuous ion exchange technology at an antimony roaster in the Middle East. Both the complexity of the treatment requirements and the harsh environment offer a rigorous testing opportunity for our technology,” she tells MechChem Africa.

“Antimony is a very interesting mineral. It has long been used for the lead antimony plates in lead-acid batteries and to improve the properties of lead-tin alloys, but it is increasingly critical for the manufacturing of modern micro-electronic components,” she tells MechChem Africa.

Antimony (Sb) is an element but mined as a sulphide called stibnite (Sb2S3). Antimony roasting involves reducing this sulphide to produce metallic antimony, a process that also produces dangerous off gases that have to be scrubbed to prevent them from polluting the atmosphere.

“This project involves cleaning the wastewater from the scrubbers and the cooling tower blowdown. For the towers, because the cooling water is recycled, it becomes increasingly concentrated with dissolved salts. The DeSALx® process has been widely used for purifying blowdown water, by taking the bleed off and removing the dissolves salts so that the water can continue to be used for efficient cooling,” Spagnuolo explains.

“The most important use for this treatment plant is to treat the scrubber wastewater, however, which is contaminated with antimony and arsenic, which are both heavy metals, as well as calcium ions, sulphates and sulphites,” she adds.

Four different feeds are coming in and merged into our system, from two different scrubbers and from the cooling tower blowdown. “The scrubbers are used for flue gas desulpherisation that removes the S02 before the offgas is released to atmosphere. The S02 is the contaminant that causes acid rain and is removed by scrubbing with water. The wastewater produced is saturated with calcium (Ca2+) and sulphate (SO42-) ions.  In addition to this, the scrubber wastewater for antimony roasters has dangerous antimony and arsenic contamination, which has to be removed and disposed of safely,” she says.

Multotec has taken the DeSALx® technology and paired it with some conventional technologies and ended up with a highly efficient water recovery and desalination plant.

Describing the entire treatment process, she says that the first step involves traditional precipitation for the removal of the heavy metals – the antimony and the arsenic. “Essentially this is a ferric chloride dosing and clarification process that produces a metal sludge in a settling tank. But this is only the pre-treatment stage of the full process,” she reassures.

The clarified water is then passed through the DeSALx® plant as the second stage of a three-stage process: “DeSALx® is a further pre-treatment stage. The DeSALx® plant acts as a high efficiency removal step that enables very high water recovery from the RO plant.

“Water in the Middle East is expensive, so it is worth treating wastewater at very high efficiency. All of the wastewater on the site is cleaned and reused at high water recoveries with minimal waste production.” she explains. This is the key message for our technology. It really enables very high water recovery when paired with conventional technologies such as reverse osmosis treatment plants,” she adds.

The DeSALx® plant is designed to remove all of the ‘larger’ ions, that is, those that are multivalent. “Reverse osmosis works by concentrating up the salts on one side of a membrane wall, enabling only ‘fresh’ water to pass to the outlet side. If a wastewater stream contains high sulphate (SO42-) and calcium ion (Ca2+)concentrations, for example, the RO process is limited in terms of efficiency because of the poor solubility of these multivalent ions. It is only possible to concentrate up to 70% or so before these ions start to come out of solution and scale up the membrane.

“By removing these ions in advance of RO, only the monovalent ions, such as sodium (Na+) potassium (K+), chlorides and some sulphite ions which are all highly soluble, have to be separated by the membrane, which allows much higher salt concentrations on the removal side and therefore less untreated water discharged with the waste concentrate,” Spagnuolo informs MechChem Africa.

How high is the high recovery rate? “Greater than 90%,” she responds. “Without the DeSALx® stage, we can only recover around 60 to 70% of the water coming from a clarifier into an RO plant. By passing only monovalent ions through the RO plant, the waste stream can be concentrated up higher without scaling occurring, enabling more of the desalinated water to pass through the membrane,” she explains.

“And this high recovery rate is the principal objective of this project,” she says, adding that the plant is currently being delivered and installed and will be commissioned before the end of 2017

. “The treatment capacity is at 12 m3/hour, which is relatively small for a minerals processing operation, but the complex wastewater and the high recovery rates make this a benchmark plant for us.”

The brine concentrate from the RO, which is mostly sodium chloride with some sodium sulphite, has to be discarded safely. “We also produce gypsum, but because it is contaminated with arsenic, it cannot be used. All of these are regarded at toxic wastes that have to be safely discarded,” Spagnuolo says.

“We also take the sludge from the precipitator and pass it through one of our filter presses. This enables us to produce a dry cake, which is easier to dispose of, while the water pressed out is passed back into the waste stream for recovery,” she continues.

“The wastewater treatment approach used at this antimony roaster is also ideal for high recovery treatment of acid mine drainage (AMD),” she suggests. “If we go the to source of AMD, and desalinate the neutralised AMD using DeSALx® followed by reverse osmosis, or vice versa, we can treat and recover water to industrial and/or potable standards very easily,” she concludes.

Ion exchangeresins, consisting of polymer beads, chemically engineered to suit specific ion exchange reactions, are moved in the opposite direction to the water flow. These moving resin beads exchange their pre-loaded ions with the ions being removed from the wastewater solution.

In the adsorption column, for example, cation exchange resin beads with H+ ions surrounding their surfaces enter the exchange column from the top. These begin to replace the dissolved metallic ions in the contaminated water. As the water rises up the column and through the resin, it becomes less and less contaminated, while the resin becomes more loaded with the contaminating ions as it moves down.

The loaded resin exits the adsorption column at the bottom and is then moved across to a desorption column. A reagent is added to the column, typically sulphuric acid for cation exchange resins, and air agitated. The acid in this example removes the metal ions from the resin (eg, Ca2+ions) and replaces them with H+ ions from the acid. Once in solution, these ions immediately react with SO42- ions to form, for example, CaSO4 (gypsum), which precipitates as a solid.

The solution is passed over a screen to remove the solid particulates, while the resin, which is now regenerated (with H+ ions), drops into the wash column where it is washed via fluidisation before being transferred back to the loading column, completing a continuous transfer cycle.