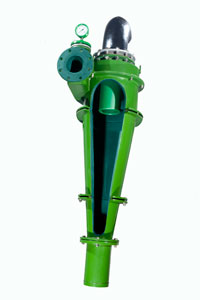 Hydrocyclones, used for classification in mineral processing, must be correctly maintained to ensure they operate at peak efficiency. If this essential equipment is not optimised, mineral processing plants will be unable to resolve any operational constraints in their systems. “Supplying only a cyclone is not good enough. You can have the best cyclone in the world, but if it is not operating at OEM specifications, the end user will not see the benefits of the technology,” Ernst Bekker, Product Specialist, Multotec Group, says. This is where an equipment supplier such as Multotec comes into its own, as it has the necessary expertise to be able to assist both customers and end users in applying sound operating and maintenance practices.

“It is necessary for mineral processing plants to take cognizance of this, and not to simply assume that the cyclone design itself will resolve any operational inefficiency,” Bekker says. However, he says the situation is exacerbated further by a lack of proper understanding of maintenance practices such as condition monitoring together with insufficient skills to operate within the designed process limits. In terms of hydrocyclones, he points to the indicators of normal operating parameters, and how to ensure optimal operation.

Firstly, Bekker says that all hydrocyclones must be equipped with a working pressure gauge. “It is surprising how often such a simple device is not incorporated in a cyclone installation in an operational mineral processing plant.” The immediate benefit of the pressure gauge is that it will indicate if there is any surging in the hydrocyclone feed. While surging can also be identified in the outgoing streams, these areas are not always accessible, which means that a pressure gauge is therefore essential for feed condition monitoring.

In addition, the reading on the pressure gauge will allow for a reasonably accurate calculation of the volumetric flow rate to the hydrocyclone which, in turn, will make it possible to calculate the mass flow rate. “Such data is essential as it will indicate clearly whether or not the hydrocyclone is operating within its feed design parameters. Should the data indicate that it is operating outside its design envelope, remedial action needs to be taken in order to avoid material being misdirected to the incorrect product streams, with a run-on effect on the overall performance of the downstream processes, together with the potential for increased wear and a concomitant loss of revenue,” Bekker says.

For example, if the cyclone overflow in a coal processing plant is directed to a flotation circuit and the underflow to a spirals section, an inefficient hydrocyclone will misdirect some coarse material to the overflow and some fines to the spirals. The flotation plant will be unable to recover the coarser particles, resulting in a loss of saleable coal via the flotation tails. The misdirected fines, which generally comprise a high ash content, will furthermore contaminate the product in the spirals circuit.

Bekker says it is not always possible to gauge the separation efficiency of the hydrocyclone by simply monitoring the underflow and overflow discharge. “Having a proper indication of the feed conditions to the hydrocyclone will make it is easier to determine if the cyclone is still operating in its designed envelope,” he stresses.

Another example where an inefficient hydrocyclone can cause problems is in milling circuits where coarse particle misplacement can lead to non-liberated material reporting to the cyclone overflow while the misplaced fine material can be over grinded resulting in recovery losses and energy wastage. Basically in any application where the hydrocyclone must perform a specific duty, inefficiencies can result in operational problems or cause revenue losses.

Another advantage of having a pressure gauge on the hydrocyclone is to indicate whether or not it is operating within the correct pressure range. Low pressures result in inefficiencies while high pressures increase the wear rate, with both scenarios having significant cost implications for the entire plant. In addition to relying exclusively on the pressure gauge, limited visual observation can be used to gain a preliminary understanding of the cyclone’s performance. This is important, as it will allow for early intervention without the need for extensive sampling regimes.

The underflow discharge pattern of the hydrocyclone contains an immense quantity of information, Bekker says. If the discharge pattern from the spigot resembles a solid ‘sausage-like’ stream, this indicates that the spigot is overloaded. “The implication is that not all of the coarse material is being directed to the underflow. Whatever coarse material is unable to be discharged through the spigot will then report to the cyclone overflow and subsequently be misdirected.”

If the discharge pattern is severely flared, then the spigot is under loaded, which means excess water with an increased fines content being directed to the underflow. This is referred to as ‘bypass’ or ‘alpha’ water. The greater the quantity of bypass water, the lower the efficiency of the hydrocyclone.  If the underflow discharge pattern is erratic, it could indicate the presence of a foreign object inside the cyclone or erratic solids feed concentrations to the cyclone, or even pressure fluctuations. Bekker adds that volume fluctuations are more easily identifiable on the overflow, as this is where the largest volume of water is directed to.

“Multotec has a unique advantage over other locally manufactured hydrocyclones, as this is the only one of its kind in the industry to feature weep holes in the exterior wall of the cyclone. Should the liner become damaged, the material which finds its way between the liner and the cyclone shell will then ‘weep’ from these holes, indicating that the liner needs to be replaced. Unplanned stoppages can be avoided as far as possible by taking heed of such early warning signs. It also reduces the frequency of internal inspection, as those cyclones without weep holes require regular inspection to assess the integrity of the liner itself. Unplanned downtime is a reality in this scenario, as the material will not only damage the liner but the shell itself, at which time the efficiency of separation within the cyclone has already deteriorated significantly. Another issue resulting in extensive liner damage is that the resulting turbulence will impact further on the classification efficiency,” Bekker concludes.